How to increase EMS funding in three clicks

Top 10 cities with most properties at risk of flooding

How community policing prevents crime: What we can learn from police history

From the Editorial Director

A sanitation truck, snow removal equipment or public works vehicle are moveable barriers that can harden mass gatherings from vehicle terror attacks and other threats.

I have distinct memories from the 2013 Boston Marathon finish line, the sight of a home-grown terrorist attack. My first memory is seeing a Boston EMS ambulance inside the secure area just after collecting my belongings. The second memory is hearing the explosions while I was milling around in the family reunion area. My third memory is watching emergency vehicles, mostly police cars, speed towards the finish area as I walked to the apartment where I was staying.

There are many threats to mass gatherings -- concerts, marathons, parades and rallies -- ranging from improvised explosive devices, active shooters and vehicle terror attacks. Since many mass gatherings, like a marathon start/finish area, require temporary closure of city streets and limited access to official vehicles, one of the actions event organizers and local government hosts can take is to use municipal vehicles strategically to block and control street-level access.

Advantages of Using Municipal Vehicles as Blocking Vehicles and Barricades 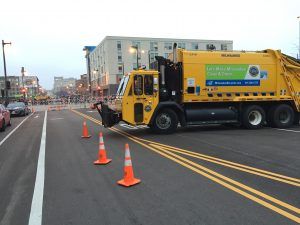 Officials from public works, fleet management and transportation departments should be part of the event planning process and the during event incident command team. Those officials can work with public safety and event security teams to provide vehicles such as sanitation (i.e. garbage) trucks, snow plows, dump trucks and city buses and personnel for public events and mass gatherings.

Use municipal vehicles to supplement fencing and barricades because the trucks are: 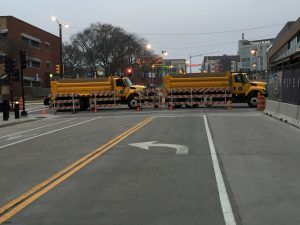 Through pre-event and just-in-time training, prepare municipal vehicle drivers on the risks and warning signs of vehicle terror attacks. Training components might include, but are not be limited to:

Here are some considerations for vehicle positioning:

Municipal drivers are on city streets every day. They know how to navigate them and can exercise their expertise to spot people, and activities, that are out of the ordinary. Involving these local road experts in the protection of mass gathering participants can increase the safety of public events.

Greg Friese, MS, NRP, is the Lexipol Editorial Director, leading the efforts of the editorial team on PoliceOne, FireRescue1, Corrections1, EMS1 and Gov1. Greg has a bachelor's degree from the University of Wisconsin-Madison and a master's degree from the University of Idaho. He is an educator, author, paramedic and runner. Greg is a three-time Jesse H. Neal award winner, the most prestigious award in specialized journalism, and 2018 Eddie Award winner for best Column/Blog. Ask questions or submit article ideas to Greg by emailing him at gfriese@lexipol.com and connect with him on LinkedIn.