Natural disasters can set the stage for cyberattacks

Cities Can Use Telehealth Efforts to Bolster Broadband

Our guest columnist Craig Settles shares insights on how telehealth initiatives can make the case for improving community broadband, with funding tips.

Smart community leaders and elected officials realize that telehealth can be the catalyst that enables more constituents to get high-speed Internet access everywhere it needs to be.

Many a plan for building a community broadband network has been hung up on the shoals of financial uncertainty. But rather than the “Gigabit or bust” approach, focus on how telehealth transforms healthcare delivery, reduces healthcare costs and creates a healthier community. Sell that solution, and make broadband the bonus prize.

The state of broadband in America is pretty crappy for millions of people. Whether you’re in a rural or metropolitan community, without the Internet, there’s nothing talk about. You can’t have telehealth without fast, reliable broadband.

Only 62 percent of rural Americans have broadband installed in their homes, according to the think tank New America, and those who do often pay exorbitant prices for sluggish speeds. In fact, 39 percent of rural Americans are unable to purchase Internet service that meets the Federal Communications Commission’s minimum standards for high-speed access – 25Mbs/3Mbs – at all.

Broadband doesn’t suck just for some of our country kith and kin. A research report from Strategic Network Group’s in 2017, “The State of American Cities Study”, revealed troubling numbers for urban as well as rural areas. Some data revealed dissatisfaction with Internet speeds, as well as big challenges to connecting the undeserved. 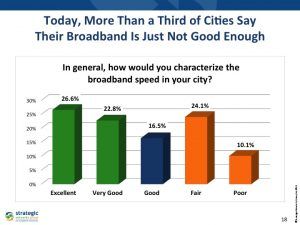 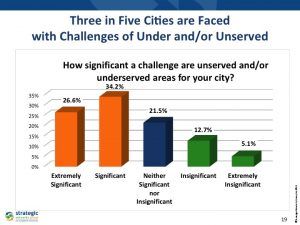 Additionally, “Over 70 percent of small businesses, which include small healthcare clinics, have less than 4 Mbps upload speed,” according to other data collected by Strategic Network Group.

How the Benefits of Telehealth Could Drive Broadband Adoption

Telehealth offers substantial benefits for those receiving healthcare, so a well-done needs analysis could help your local government translate the need for institutional broadband as well as individual access to high speed service.

As community-owned networks go online, "Some find more interest among stakeholders for using broadband for telehealth, and its subset telemedicine, than for economic development,” John Windhausen, executive director of the Schools, Health & Libraries Broadband (SHLB) Coalition, shared with me. “There can be several reasons, starting with the fact that almost everybody is affected by healthcare,” he said.

In the U.S., the telehealth market is driven by the rising healthcare costs, upcoming regulatory policies, rising prevalence of chronic diseases, shortage of physicians and increasing funding for telehealth. It is estimated 90 percent of all self-insured businesses will have some form of telehealth in the workplace because it has a provable ROI.

People may not know a gigabit from of giraffe, but they will pay for and/or support projects that enables an elderly parent to stay safely in her home, or workers with two or three jobs to get regular healthcare treatments or check ups. They want the benefits a particular technology delivers, and care less about the technology itself.

There is a segment of the population who are not low-income enough to qualify for Medicaid, they don’t earn enough to afford health insurance and their employers don’t provide it,” Eric Bacon, president of AMD Global Telemedicine, said. “So they go to the ER, which is more costly for local government.”

Telehealth subsequently can save ER departments, individuals and municipalities money.

Telemedicine can cover many medical disciplines, including mental health, stroke, dermatology, women’s health and physical rehabilitation. Just about every person -- from newborns to seniors -- may find that telemedicine influences their lives at some time. Healthcare stakeholders can quantify for municipal broadband planning teams how telehealth makes sense and saves dollars.

The Healthcare Hub: A New Triple Play for Broadband

In broadband, there’s a deployment strategy called a “triple play” in which a network infrastructure combines data, telephone and video services. Communities might consider an infrastructure triple play that aligns hospitals and healthcare institutions, schools and libraries into a healthcare hub that also becomes a fundraising triumvirate.

An engineering design team can design a wired and wireless infrastructure that ties together all three groups into a mini network and add a number of telemedicine applications and services. Then the community, via the local government, public utility, co-op or a public private partnership that constructs and operates the network, can apply for the FCC’s E-rate fund (libraries and schools). The FCC’s $400 million Healthcare Connect goes to healthcare facilities.

Caveat for communities: This is substantially more difficult than it sounds.

However, if a community does its due diligence, advances a strong business case for such a healthcare hub and follows the FCC rules, they can open up additional funding opportunities, such as U.S. Department of Agriculture’s Community Connects Grants and USDA funding for telemedicine applications -- even if the community doesn’t receive FCC funds.

Healthcare hubs offer out-of-the-box thinkers opportunities new, exciting, market-driven approaches to boost both broadband and telehealth adoption. We are early enough in the game that there aren’t a lot of rules about “the right way” to bring broadband into the community – just the right way that works for your particular community.

The idea that a broadband service provider could be something different than what we are used to seeing, such as telemedicine providers, is a good argument against the sorts of legislative restrictions we see in some states,” Ben Lewis-Ramirez, a business development manager with Foresite Group, said.

Bottom line: general healthcare, telehealth and telemedicine delivery can make a strong financial business case that justifies broadband investment, and make it easier to raise money for these networks. Furthermore, the healthcare hub can be a great foundation on which broadband infrastructure can be expanded into other parts of your community.

Craig Settles is a broadband industry analyst and consultant to local governments. His latest analysis report is Telehealth & Broadband: In Sickness and In Health, an assessment of why telehealth providers and community broadband builders should work together to drive broadband and telemedicine adoption.

Behind virus and protests: A chronic US economic racial gap