Changing demographics mean local government websites must be fast, easy-to-use, mobile-friendly and accessible. See how cities are evolving their websites.

Local government leaders across North America are paying close attention to the growing expectations of residents. Digital natives are highly engaged online and have an increasing demand for online services, so they are driving municipal governments to reassess the content, design and function of their websites.

Thinking of citizens as customers and organizing website information from the citizen’s perspective are keys to surviving and thriving in the always-on, always-connected digital culture that is reshaping our communities.

Vision clients share how they’ve adapted to their communities’ changing demographics and have positioned their municipal websites as the go-to source for digital natives. Government portals must be fast, easy-to-use, mobile-friendly and accessible to people with disabilities.

There's No Turning Back

Accenture’s latest Public Services Pulse Survey report states that in assessing U.S. citizens‘ views of digital government in 2014, “nearly three-quarters (73 percent) indicated that they hold government to the same, or higher, standards as their commercial providers. In the follow-up survey – just two years later – the percentage surged to 85 percent.”

Moreover, the study found that the most significant obstacles encountered when using digital government services is “poor website organization.” 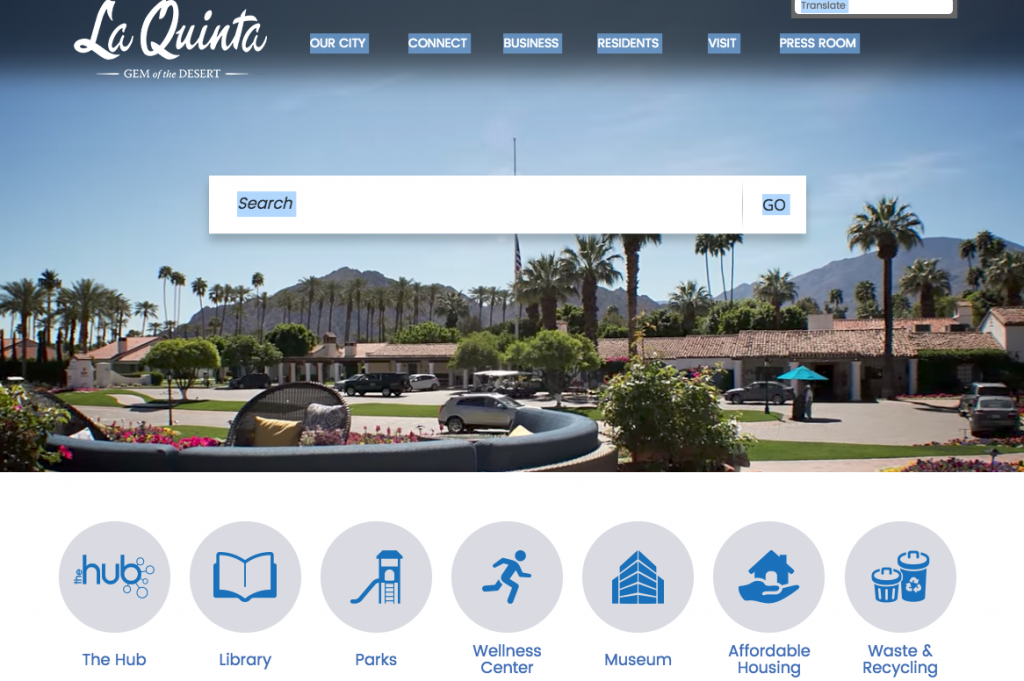 An influx of young families to the southern California resort city of La Quinta, for example, drove city government to develop a new engaging, service-oriented website.

In addition to serving year-round residents, La Quinta is a destination city for festivalgoers in the summer months and snowbirds in the winter. Regardless of how many months they live in the city, visitors, residents and businesses prefer online services and communication, and La Quinta has responded to that. They look to the city site for information on family activities and now can apply for permits completely online. It’s faster, more convenient and environmentally friendly. La Quinta is looking to go digital and paperless for all its processes in the future.

Through the process, La Quinta discovered that its tech-savvy population was not just composed of younger citizens. It's older citizens are also digitally savvy and making use of the site.

When It's No Longer Primarily Cow Country

In San Marcos, Calif., one of San Diego County’s fastest growing cities, the demographics have changed substantially over the last 10 years. As one city official described it, the area has gone from cattle ranches and chicken farms to a diverse, vibrant community that boasts 90,000 full-time residents and a part-time college population of nearly 50,000.

San Marcos responded to this changing citizen profile with a new upgraded and mobile-friendly website. The site offers online job applications, the ability to report concerns and an online map of major development projects that provides real-time updates on work being around the area.

As a result, the San Marcos website has become the primary window to the city for residents and visitors alike. The city has direct control over its website content and residents have learned it is a trusted source of information that’s not going away.

Changing demographics underscore the importance of knowing your audience and your community; it influences how you meet their needs.

The city of Raymore, Mo., is another case in point. This community is in a reverse bell curve; on one side is an older population, more rooted in traditional media, and on the opposite side are young, digitally dependent families, which comprise the city’s fastest-growing population.

To serve both audiences, Raymore is using smart design to publish smaller chunks of information and more infographics that display well on its website and social platforms. The city’s intuitive website allows residents to conduct business online simply and seamlessly, resulting in a significant uptick in online bill payments. With any magazine or weekly newsletter, Raymore’s communications encourages people to go to the website, which allows city officials to track interest and be more responsive. It has the added benefit of facilitating good rumor control, since much more information can be shared on the website.

While a shift in a community’s demographic mix can drive a local government to adopt a more digital culture, generational changes in council and city leadership can accelerate the process. When the city of Grand Forks', N.D., new city manager and newly-elected council members agreed the city had wrung all the value from its former website, the communications department’s long-standing funding request for a new website was quickly granted. These new public officials were used to searching the Internet and had significant expectations for the city’s new site.

It’s now become a standard practice for the Grand Forks communications team to track the city’s digital efforts and deliver a report to council every two weeks. Council finds a lot of value in knowing what residents are viewing on the site.

The lesson that we take away from the experiences of these cities is clear. While social media and mobile-friendly responsive design are increasingly being leveraged to engage citizens, nearly every post, Tweet and instant message should link back to city and county websites, which can serve as a home base for detailed local information and services. It’s the vital hub in the wheel of local government communications.

Ashley Fruechting is Sr. Director of Marketing & Strategic Partnerships for El Segundo, Calif.-based Vision, a leader in government website development with more than 700 government, non-profit and education clients across the U.S. and Canada. For more information visit www.visioninternet.com.