Natural disasters can set the stage for cyberattacks

Cities That Know How to Throw a Holiday Party

The cities that sparkle with community engagement have figured out their recipe for how to throw a holiday party.

The holidays are a time for reflection, family and reaching out. While exchanging presents and sharing meals with those close to you is worthwhile, taking in an event with fellow community members – even strangers – can also be beneficial, because it engenders inclusivity and compassion in participants. Here are a few examples of U.S. cities that glow with community engagement during the holidays. From Fairbanks, Alaska, to Ashdown, Arkansas, these cities know how to throw a holiday party.

Land of Lights in Louisville, Kentucky

Light Up Louisville kicks off its 33rd year on Nov. 24 (the day after Thanksgiving) with the arrival of Santa Claus, who will light up downtown along with Mayor Greg Fischer, illuminating the city with thousands of lights on trees and buildings, according to an article on WLKY’s website.

“This is the one time of the year when people of all faiths come together with love and compassion to celebrate their beliefs,” said Tom Partridge, president and CEO of Fifth Third Bank, an event sponsor.

A parade and two 5K runs will precede the lighting ceremony and fireworks will follow. Events will continue through New Year’s Eve, with a 40 Nights of Lights celebration featuring a nightly, 12-minute light show synchronized to music and a skating rink open to the public.

"Louisville is a city known around the world for our festivals and events and we are always working to make them the best they can be, Fischer said in the article. “By continuing to grow and improve Light Up Louisville and 40 Nights of Lights, we’re keeping alive the tradition that families have enjoyed for decades and adding new lights, excitement and activity to bring more citizens and visitors downtown to celebrate the season.” 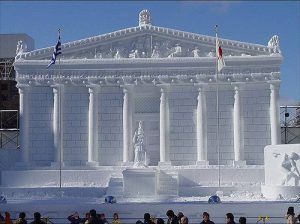 How to Throw a Holiday Party: Fairbanks' Showstopper

Chilly Fairbanks knows how to do winter, and the community has plenty of chances to get together, starting at the end of November with a six-week event called Christmas in Ice, which takes place at the Winter Ice Park and features a variety of holiday-themed ice sculpting competitions.

Christmas in Ice is a “quintessentially family-friendly event,” according to Explore Fairbanks, and children can enjoy “a frosty playground crafted out if ice equipped with a fantastic ice maze, ice twirlers and ice slides.”

Add a couple letters to this city’s name and its downtown is transformed into Merrysville for the Holidays on Dec. 2, with family activities and craft show. Later, the Electric Lights Parade gets underway featuring a flotilla of vehicles, floats and walking groups decked out in glistening holiday lights, according to the city’s website.

Following the parade, the city’s water tower will be lit up to welcome the holiday season, and the community will be treated to a concert.

Donations of non-perishable food items and new, unwrapped gifts for the Marysville Community Food Bank will be accepted at the event.

Hop on the KCS Holiday Express, a festive, six-car train that brings Santa Claus and his elves to communities throughout the Kansas City Southern Line’s U.S. rail network. Families tour three cars filled with displays, and each child receives a gift bag.

According to the company website, the Holiday Express was created in 2001. Volunteers transformed retired rail cars that today feature a smiling tank car named Rudy; a flatcar carrying Santa's sleigh, reindeer and a miniature village; a gingerbread boxcar; the elves’ workshop; a reindeer stable and a little red caboose. Admission is free.

The train stops in more than 20 cities in Louisiana, Oklahoma, Missouri, Texas, Kansas and Arkansas, and at each stop, donates warm clothes and other items to children served by the local Salvation Army.