Face masks: Here’s what cops, firefighters, medics and COs have to say about use, policy and effectiveness

Repairing the system: Improving policing practices in communities of color

The problem with bright red and white in fire station design

Election 2020 through the eyes of a Massachusetts poll worker

The Las Vegas Mayor asked for blood donations following the October 1, 2017, mass shooting. But donations spike after tragedy, and can go to waste

Updated October 2, 2018 to reflect on blood donations after MCIs and add resources.

LAS VEGAS — At least 58 were killed and 515 injured as of a 12 pm press briefing from the Clark County Sheriff's Office in the October 1st shooting by a gunman on the 32nd floor of the Mandalay Bay hotel-casino attacking people attending the Route 91 Harvest country music festival.

"As we look forward to continuing what our great city does, we offer a safe place, this is a crazed lunatic full of hate, but it’s certainly not an extension of what we believe in," before asking that cities that are interested in helping should send blood.

Several mayors and governors have called today asking how their cities can help, and she said she asked for blood donations. Nevada Governor Brian Sandoval repeated the request.

If you would like to donate blood for the injured victims of the Strip shooting visit the Labor Health & Welfare Clinic, 7135 W. Sahara.

Blood Donations Can Go to Waste

Following last year's Las Vegas shooting tragedy, cities from outside the region began sending blood, such as Panama City, Florida, according to WJHG.com. However, blood donations can overwhelm the ability for blood banks to store them and can go to waste.

According to Dennis Todd, chair of AABB (formerly the American Association of Blood Banks) Interorganizational Task Force on Domestic Disasters and Acts of Terrorism, interviewed by Newsweek in the days after the tragedy, the supply on hand was actually enough to treat the victims.

It was the regular donors who had given in weeks prior that saved lives.

While some post-tragedy donation did replenish Las Vegas supplies, according to the story, a glut of blood donations from outside an incident area runs the risk of ultimately being wasted.

Initially, Metro Police were hosting the family assistance center, but it moved to the Las Vegas Convention Center. 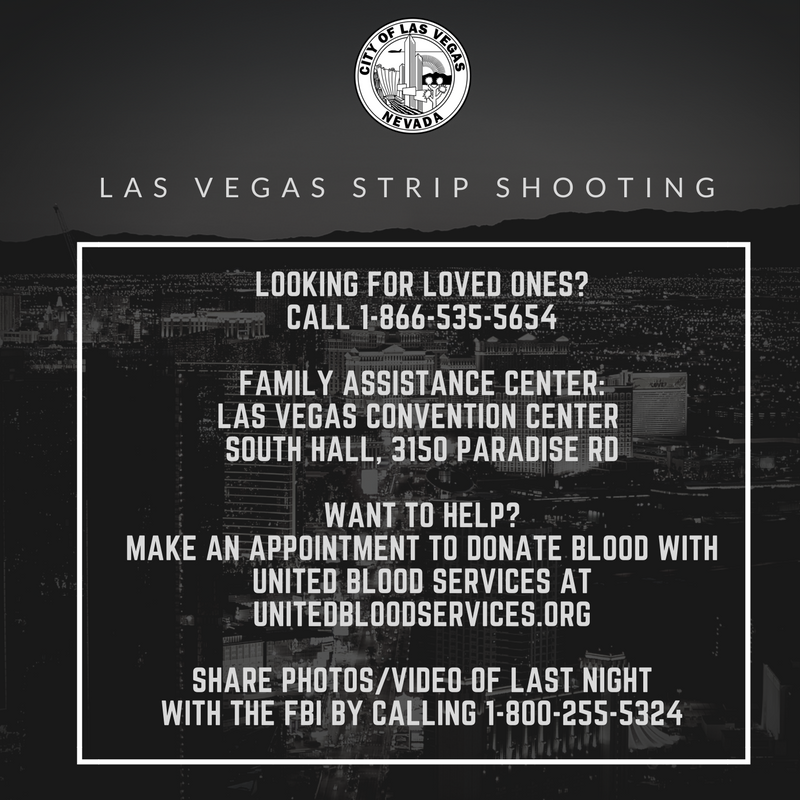