Self Driving Cars Expected to Migrate Risks from Drivers to Manufacturers, Cities

Learn the three dimensions of risk that autonomy is changing, why the public may be more open to adopt self driving cars than you might think and what today's use cases mean for the future.

Self driving cars are the showpiece of CES 2018, but technology is not the only thing on the premier stage for global innovation that wows technologists and the public sector in attendance for overlap with CES Government 2018. Risk managers that are studying transforming transportation offered their insights about the risk management factors of full autonomy, which presents cost implications.

As our mobility behavior changes we think about risk and exposure differently as well. The shift is upending our conventional wisdom about liability and the way we predict the cost of risk,” said Lex Baugh the chief executive officer of North American General Insurance for AIG.

In a panel discussion, Baugh and others studying self driving vehicle risks expressed opinions about the public's readiness for adoption as well as issues the government would be on point to formulate policy around. Their live webcast discussion addressed issues including the three dimensions of autonomous transportation risks, peak auto and public perceptions of self driving cars and their liabilities.

Since information about public perceptions and attitudes about self driving cars is badly needed, AIG conducted surveys of 1,000 driver-age people in the United States, 400 Singaporeans and 400 residents of the United Kingdom to explore public attitudes about their adoption.

“We do know there are 40,000 human lives lost in car accidents in the U.S. alone, and guess what, 90 percent of this is supposed to be from human error,” said Gaurav Garg, the CEO of AIG’s personal insurance business.

The AIG survey asked about the risks of the road today, what drivers think the risk will be with semi-autonomous vehicles and how they perceive risks with driverless cars.

While drivers in U.S. rated themselves superior to the average driver, the survey found that the majority of respondents do think that self driving cars could be safer, and they have expectations that insurance premiums would come down as a result.

But are People Ready to Adopt Self Driving Cars?

Garg noted that from a consumer perspective, the biggest hurdle to overcome for adoption is the trust gap. Less than 50 percent of respondents in the survey reported feeling comfortable in self driving cars, though four out of ten agree autonomous transportation is safer, he said. He pointed out that while navigation of various road intersection permutations are being worked on, but even when the technology is able to do everything, that trust gap still needs to be overcome for consumers to trust and adopt full autonomy.

Sixty-seven percent of respondents are worried that a cyber breach of a self driving car could expose personal information, such as credit card details, reveal when and where a driver travels and learn who is in the vehicle. The idea that private conversations could be recorded was also registered as a concern, according to AIG's announcement about the report, available below.

Garg also noted that framing regulations in this area will be critical to making the autonomous transportation ecosystem work.

Conversely, Kate Sampson, vice president of risk solutions at Lyft, said that the rate of adoption, based on her experiences with launching Lyft and Lyft Line, is going to be faster than most people think.

“We will get in these cars, and experience it and stay with it,” she said, noting that she is bullish and optimistic on autonomy adoption. She told the story of when she was working to launch Lyft that most insurers called it “hitchhiking,” which we are taught never to do because of stranger danger.

Lyft knew they had to change consumer behavior to succeed:

When the company next launched Lyft Line, sharing a ride by a stranger with another stranger, within months 50 percent of the rides in San Francisco were sharing a ride, Sampson said. Thus, she predicts adoption is going to be much faster than what we think, because the accidents are going to be caused by human drivers, not the “robot cars.”

Also on the panel was Professor Emeritus Robert Peterson, former director of the Center of Insurance Law and Regulation at Santa Clara University School of Law and Former Chair of the Standing Committee on Insurance Law of the State Bar of California, who led the study.

“New technology in this age can sweep away the status quo almost overnight…These cars are going to be on the road and in substantial numbers particularly in urban areas where the value proposition is pretty obvious very, very quickly,” he said.

Experts Say the Risks Will Shift, as Will Risk Management 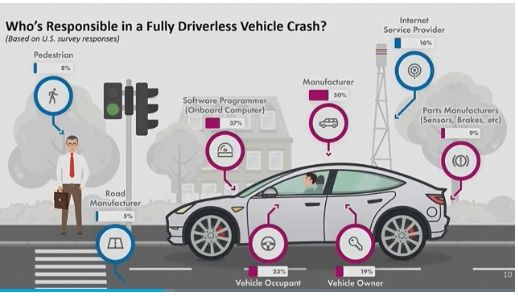 Baugh explained that the robust data available today offers risk managers deeper insights. He said that with autonomous transportation, risks will change, not disappear. Insurers are thinking about where those risks will migrate to, including to automakers and the municipalities that own the roads that will communicate with self driving cars.

An example of risk mitigation in autonomous driving is automakers are focusing on things people don't do particularly well, like using brakes to avoid collisions. Automakers are taking the human out of the process to make that process safer.

Unlike people, the “machine” will do a better of making the decision, “But when it gets it wrong, it won’t get it wrong once, it will get it wrong thousands of times or millions of times, and so the aggregation of that risk is very different from what we've had to deal with as an economy up until now," said Baugh, citing the example of something going wrong in industrial controls that govern operations at multiple plant locations.

Describing an example from medical liabilities, hospitals are exposed to risk by false negatives that send patients home who then have bad outcomes. When medical equipment and monitoring reduces the risk of bad outcomes for patients, the hospital liability is reduced, but the medical equipment manufacturer, and perhaps the doctor monitoring the equipment, have new liabilities.

Peterson noted that regulatory challenges are beginning to manifest in the tensions seen between the states and Federal government about who is going to take the lead with regulations.

Salen Churi, assistant clinical professor of law and the Bluhm-Helfand Director of the Innovation Clinic at the University of Chicago Law School, the panel moderator and author of the Internet of Things Risk Management Checklist, U.S., said Lyft built a digital trust platform as it paved the way for ride sharing adoption.

Sampson said she believed if we are not already at peak car, we are fast approaching it. There is a cost factor to decisions when there are more cost-effective alternatives available. The various forms of ride sharing that will occur with semi-autonomous technology until full autonomy is achieved is already presenting value in today's use cases of Mobility-as-a-Service, such as Lyft’s partnerships with healthcare services to transport patients in non-emergencies.

Peterson said he believes it will happen quickly. If a self driving car replaces six cars, adoption of self driving cars increases from 5 percent to 30 percent, he said.

Read about the U.S. first public self driving cars test by Waymo.

Plan to return control of St. Louis FF pensions to FF-dominated board gets initial OK