Learn how a digital self-assessment tool being designed for PSAPs will assist with NG911 readiness and get best practices tips and resources for achieving interoperability.

Last month the National 911 Program, a program housed within the National Highway Traffic Safety Administration's Office of Emergency Medical Services, hosted a webinar about progress of next generation 911 readiness – including the NG911 Readiness Checklist developed by the Task Force on Optimal Public Safety Answering Point (PSAP) Architecture (TFOPA) currently being digitized by a joint working group of SAFECOM, a communications program of the Department of Homeland Security (DHS), and the National Council of Statewide Interoperability Coordinators (NCSWIC).

The user-friendly NG911 Readiness Scorecard tool is being designed for PSAPs to self-assess their NG911 readiness. The Joint SAFECOM/NCSWIC NG911 Working Group (working group) is also completing a position paper with transition steps, terminology and standards for PSAPs, and has updated its NG911 cyber risks primer (review and download, below) with more detailed information, common terminology for the 911 community and educational references, according to Gerald Jaskulski, DHS Office of Emergency Communications (OEC) and federal lead for the working group.

“Even with land mobile radio and smart phones from three carriers there are still places in Philadelphia where I don’t have mission critical voice communications.” ⁦@ThielAdam⁩ of ⁦@PhillyFireDept⁩ at the ⁦@APCOIntl⁩ Broadband Summit. #APCOBBS pic.twitter.com/b0ilE8ObvS

David Furth, deputy chief of the Federal Communications Commission Public Safety and Homeland Security Bureau, noted that the working group’s primary purpose is to create work products that PSAPs nationwide can use for NG911 transition.

There are six stages to achieving national 911, and PSAPs are the target jurisdictional end state stage prior to that ultimate goal, he said. There are nine areas of interest for achieving PSAP readiness:

The digital self-assessment tool in development is a spreadsheet that will make it easy for PSAPs to enter information about systems and tools and get a result on its state of NG911 readiness, according to Mark Buchholz, director of Willamette Valley 9-1-1, Salem, Oregon, and chair of the Joint SAFECOM/NCSWIC NG911 Working Group.

Once information is entered, the tool will assess the PSAP’s maturity level to NG911, which will enable emergency communications managers to understand if they are in an earlier -- or later -- NG911 transition stage.

Furth noted that maturity stage scoring is based on the working group’s review of legacy PSAPs and those in digital transition.

Transition to NG911 scoring in the tool is broken down into several stages based on a “common stick of measure.”

The PSAP Scorecard Tool app is not available online yet. By email, Buchholz explained that the working group is vetting each line and entry in the scorecard “to make sure it makes sense in all regions of the nation and from small PSAPs to very large regional or state programs,” and is on schedule to launch the pilot testing in January 2019.

To participate in the NG911 Readiness Scorecard testing and evaluation, contact NG911wg@hq.dhs.gov.

The webinar also focused on coordination among federal, state and local jurisdictions. 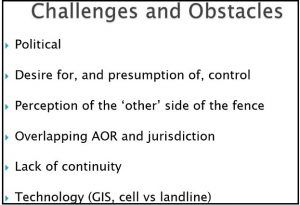 Interaction between Department of Defense (DoD) and state and local PSAP partners differs drastically state-by-state and across the country. Some states have jurisdictional level of decision-making in NG911 transition.

Adam Wasserman, Washington State Enhanced 911 Coordinator, explained that the goal is for all in Washington to have the same 911 experience across the state. There are 39 counties that have home rule 911 control with 83 registered PSAPs as well as tribal, DoD and state patrols.

There are some areas where PSAPs have jurisdictional overlap, but there are close working relationships so they “know what to expect when they’re handling a call jointly,” he said. Some PSAPs also provide integrated response, which results in better response times, but could also blur the lines when it comes to budgetary decisions over resources.

It’s critical to meet with each other, sit across the table and iron out questions and concerns, Wasserman said. He reviewed the following best practices as a reference: 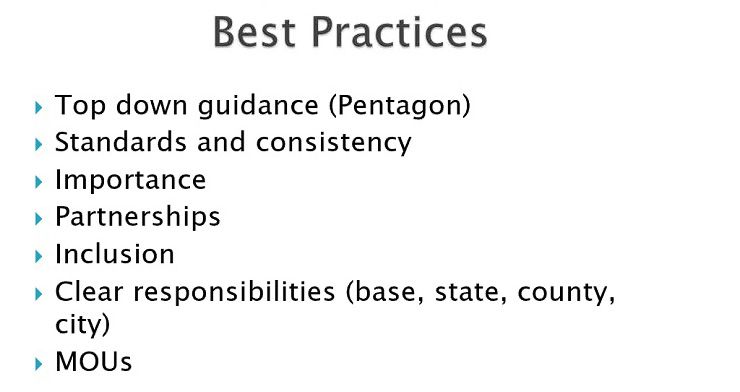