From pyrotechnics-gone-wrong to animal electrocution: The odder ways wildfires ignite

Silence is not a winning strategy: Why police leaders must speak up in times of crisis

Natural disasters: The cost of unpreparedness

Who are street medics?

Tesla plans to ramp up production of its Model 3 sedan beginning this summer, but workers at its sole car-producing factory in Fremont, Calif., want better pay and more say about conditions.

Autoworkers from the Tesla factory in Fremont, Calif., have created the campaign A Fair Future at Tesla and have taken to Medium and Facebook to address wages and working conditions at the factory that will start producing the Model 3 this summer.

The Model 3 is the electric sedan designed for the masses with it's $35,000 starting price. The model that Tesla Chief Executive Officer Elon Musk announced last year, saying that it could bring in $20 billion per year for the company.

According to Tesla employee Jose Moran, employees are underpaid, work mandatory overtime and suffer preventable injuries because machinery is not ergonomic, resulting in employees having to compensate with their bodies. Although fed up, they don't want to give up their jobs.

Musk himself noted that Tesla is the last car company left in California, in social media messages shared with Bloomberg News.

A Fair Future at Tesla suggested in a fact sheet sent to Gov1 that "as Tesla grows from an ambitious startup into an established manufacturer, there is an opportunity for Tesla to become a champion for workers."

Although the cost of living in the Bay Area is among the highest in the nation, pay at Tesla is near the lowest in the automotive industry," wrote Moran about why Fremont auto workers contacted the United Auto Workers (UAW) to help unionize workers at Tesla, Inc. in his Medium post.

Tesla's Plans to Ramp Up

While Tesla is building other factories, like the Nevada gigafactory, Tesla currently manufactures all of its vehicles in Fremont, according to Bloomberg News.

Last year the company produced 76,000 cars. But, Tesla has been promising to vastly ramp up production by 2018 -- there are 400,000 Model 3 orders to fill, according to a Business Insider analysis of why Musk has decided to stay on President Donald Trump's economic advisory panel. Uber's CEO, Travis Kalanick, stepped down from that panel after Uber drivers demanded it it in response to recent federal immigration orders.

Musk also was pressured to step down from Trump's committee, but he stayed on, citing the opportunity to provide counterbalance and push sustainability.

Regarding the meeting at the White House: pic.twitter.com/8b1XH4oW6h

In January, California State Assembly members wrote to Tesla about a confidentiality policy Fremont workers had recently been asked to sign. According to the assembly members' letter, wage and working conditions must be kept confidential.

The letter, below, was sent to Gov1 by Bergen Kenny of Storefront Political Media.

Tony Thurmond, assembly member representing the 15th District, could not immediately be reached to confirm that Tesla or Musk responded to the letter.

However, Bloomberg News reported that Tesla did respond, saying its confidentiality policy related to press leaks about its products.

When Musk reportedly used social media to respond to Moran's Feb. 9 Medium post, he said the UAW was possibly paying Moran to push for a union at the Fremont factory. 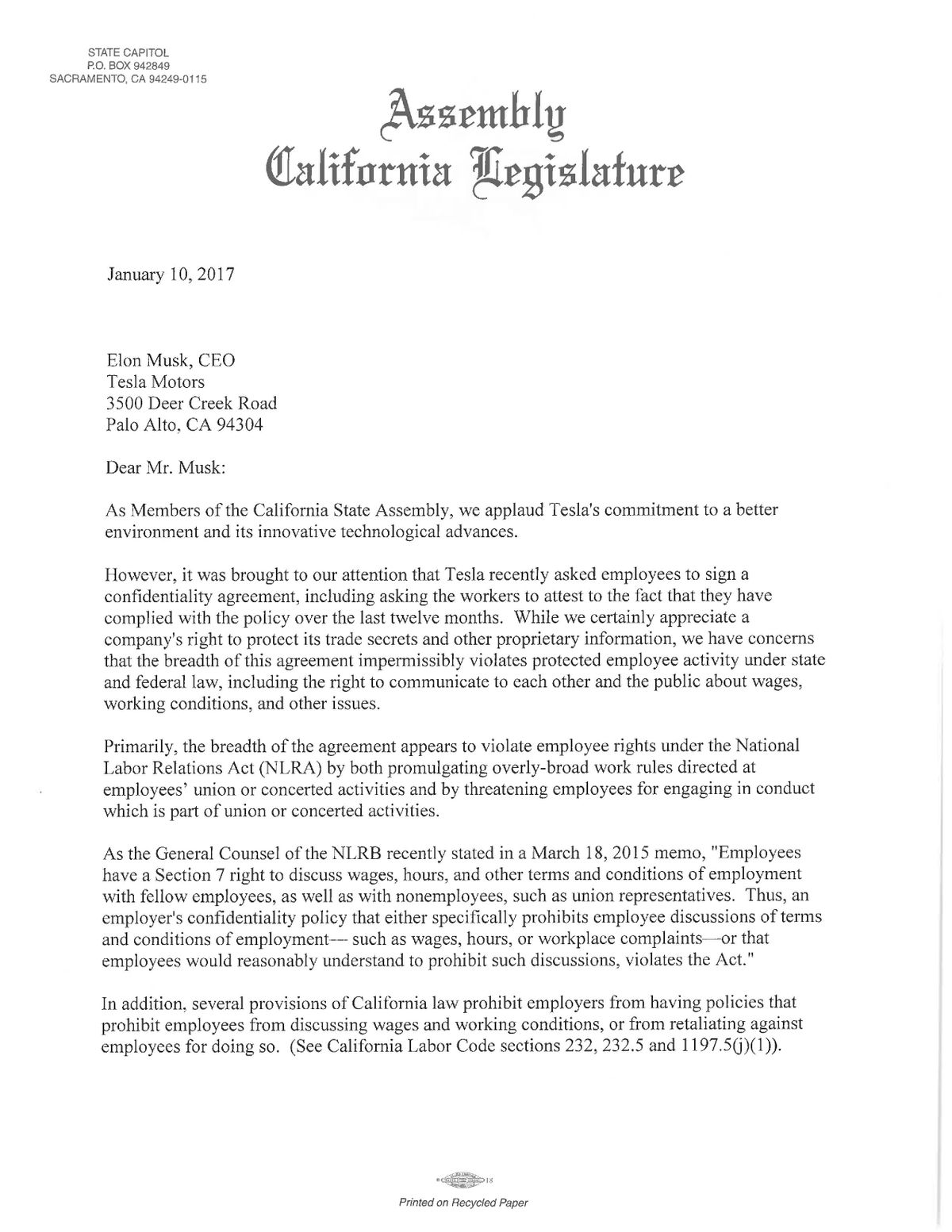 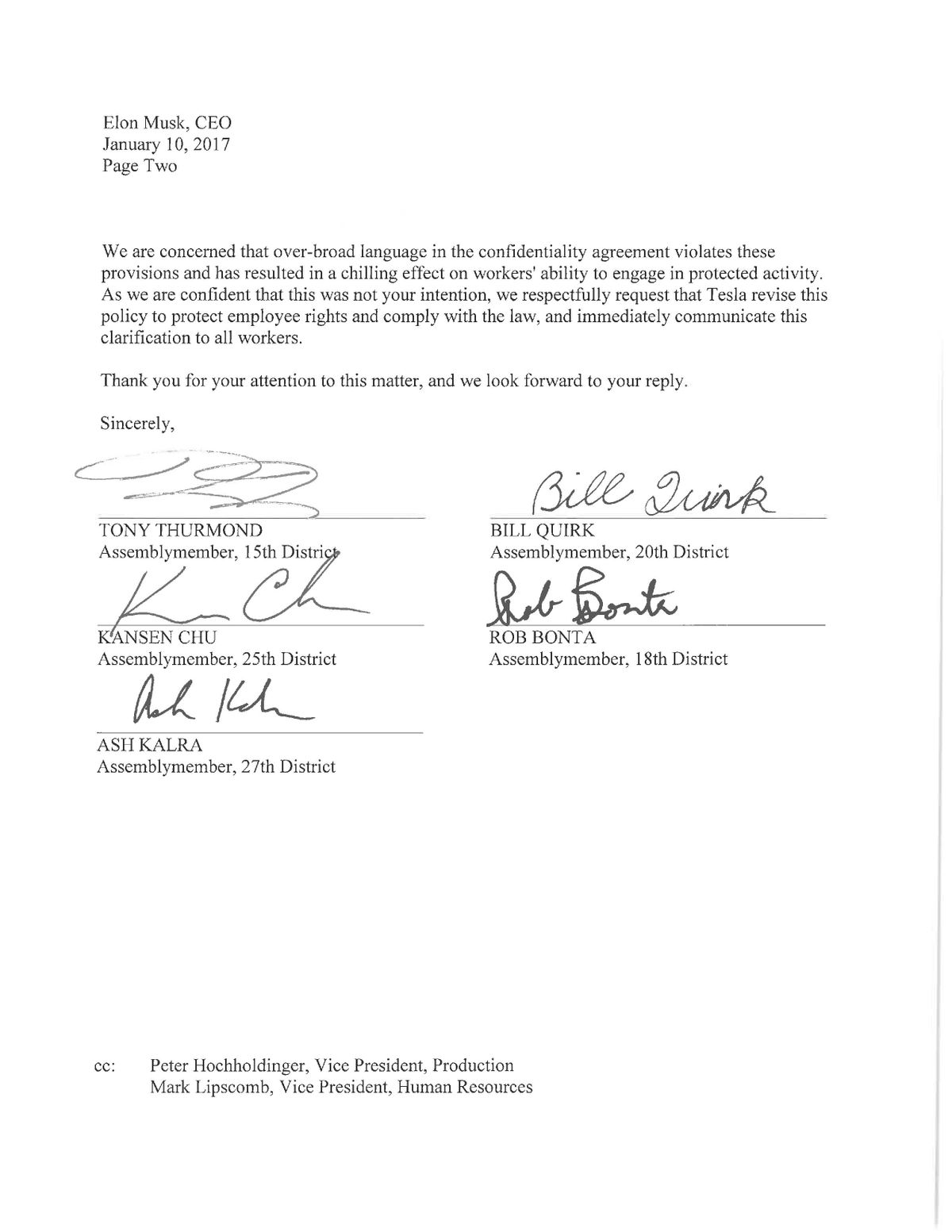