How Prevalent is Sexual Assault on College Campuses?

The NIJ investigated 15 years of reports to prepare data about the prevalence of sexual assault on college campuses.

Editor's Note: Data about sexual assault on college campuses varies widely, so the National Institute of Justice (NIJ) gathered prevalence estimates for campus sexual assault in the U.S. published over 15 years and shared the results in June 2016. Campus sexual assault data has been of heightened interest since Education Secretary Betsy DeVos issued interim guidance in 2017 that "raised the standard of proof for accusers to 'clear and convincing evidence' from a 'preponderance of evidence' and allowed cases to be settled in mediation sessions between the accuser and the accused," according to the New York Times. Further, controversy extends beyond national government policy to how colleges and institutions of higher learning release information about sexual misconduct cases they investigate. In Kansas, for example, universities asked to release information about their number of reported sexual assault incidents and cases have refused, citing federal student privacy laws. The participants in the NIJ research review indicated incidence since entering college, or while engaged in college study; however the studies and reports vary in their measurements -- and NIJ indicates a picture of sexual assault on college campuses is still incomplete.

Gov1 gratefully acknowledges the NIJ for allowing us to reproduce in whole, the article How Prevalent Is Campus Sexual Assault in the United States? from NIJ Journal No. 277. The opinions, findings and conclusions or recommendations expressed in this article are those of the authors, and do not necessarily represent the official position or policies of the U.S. Department of Justice.

The article below is reprinted with permission of NIJ.

Sexual assault on college campuses continues to make national headlines. We know the victims suffer short- and long-term health problems, such as sexually transmitted infections, depression, anxiety, eating disorders, chronic illness and post-traumatic stress disorder. We also know that college students who have been sexually assaulted are more likely to engage in risky behaviors, such as binge drinking and drug use, and have lowered academic achievement, and they may be at greater risk for revictimization.

A number of government and campus initiatives aim to address the problem. For instance, in September 2014, the White House partnered with stakeholders to launch "It's On Us" and "Not Alone," national public awareness campaigns focusing on preventing and responding to campus sexual assault.

But to truly tackle sexual assault on college campuses, we must understand how often it occurs. How many college students are sexually assaulted, and what factors are associated with higher or lower prevalence rates?

Official estimates vary widely. To date, no studies have systematically reviewed prevalence findings in the research on college-based sexual victimization, which would provide greater insight into the extent of the problem, the types of sexual victimization that students experience, and how study methodologies influence the prevalence rates found.

To help fill this knowledge gap, we systematically gathered prevalence estimates for campus sexual assault in the U.S. that were published between January 2000 and February 2015. We defined "prevalence" as the reported percentage of study participants​ who reported sexual victimization since entering college or during a study follow-up period or time frame while attending college.

Learn about the definitions used in our review.​

We examined peer-reviewed studies, dissertations and reports on a wide range of topics, such as health outcomes, risk factors and evaluations of campus intervention or prevention programs. We assessed and synthesized prevalence findings, research designs and methods, sampling techniques and measures, including types of sexual victimization.

Our goal was to better understand the range of prevalence findings currently available and the factors behind the variation. We also wanted to present recommendations for campus prevention and response strategies and propose research questions for future studies on campus sexual assault.

Only one study sampled students at vocational and trade schools, so it is unclear whether the prevalence of sexual assault among nontraditional college students differs from that among traditional full-time students attending four-year colleges.

Despite the discrepancies, the studies we reviewed — even those with lower estimates — all point to the same troubling truth: A substantial proportion of college students are sexually assaulted.

Students experience different forms of sexual victimization, and prevalence rates for each form often vary from campus to campus. Schools should start with a detailed understanding of the types of sexual victimization occurring on their campuses and appropriately tailor prevention and intervention strategies, treatment for victims and campus response.

We found a high prevalence of unwanted sexual contact and sexual coercion; therefore, prevention efforts should include a focus on the dynamics of these two forms of victimization. Further, the disproportionate rates of victimization among LGBTQ (lesbian, gay, bisexual, transgender, queer/questioning) students, students with disabilities and racial and ethnic minority students highlight the need for responses that are inclusive and culturally specific.

When researching campus sexual assault, it is important to clearly define and separately measure the range of experiences that may fall under "unwanted sexual contact," "forcible rape," "incapacitated rape" and "drug- or alcohol-facilitated rape." Standardized definitions can help us better understand how prevalence rates vary and how to develop appropriate prevention and intervention strategies for various types of sexual victimization. Studies should continue to include behaviorally specific measures, such as providing students with examples of unwanted sexual experiences. Also, measuring victimization "since entering college" will help distinguish campus sexual assault from childhood, adolescent and lifetime sexual victimization.

Future studies should measure sexual victimization among students who may be at greater risk for sexual assault, such as LGBTQ students, students with past histories of sexual victimization and students with disabilities. Future research should also explore whether sexual assault among students at alternative college education programs is similar to or different from sexual assault among traditional college students; this will help nontraditional programs develop appropriate intervention and prevention responses for students. Additionally, researchers should consider contextual and cultural differences between public and private universities — for example, small liberal arts colleges versus large public state universities — as well as four-year colleges and vocational or trade schools when measuring the prevalence of sexual victimization on different types of campuses.

For a detailed discussion of our review and findings, see "Campus Sexual Assault: A Systematic Review of Prevalence Research from 2000 to 2015," in Trauma, Violence & Abuse. 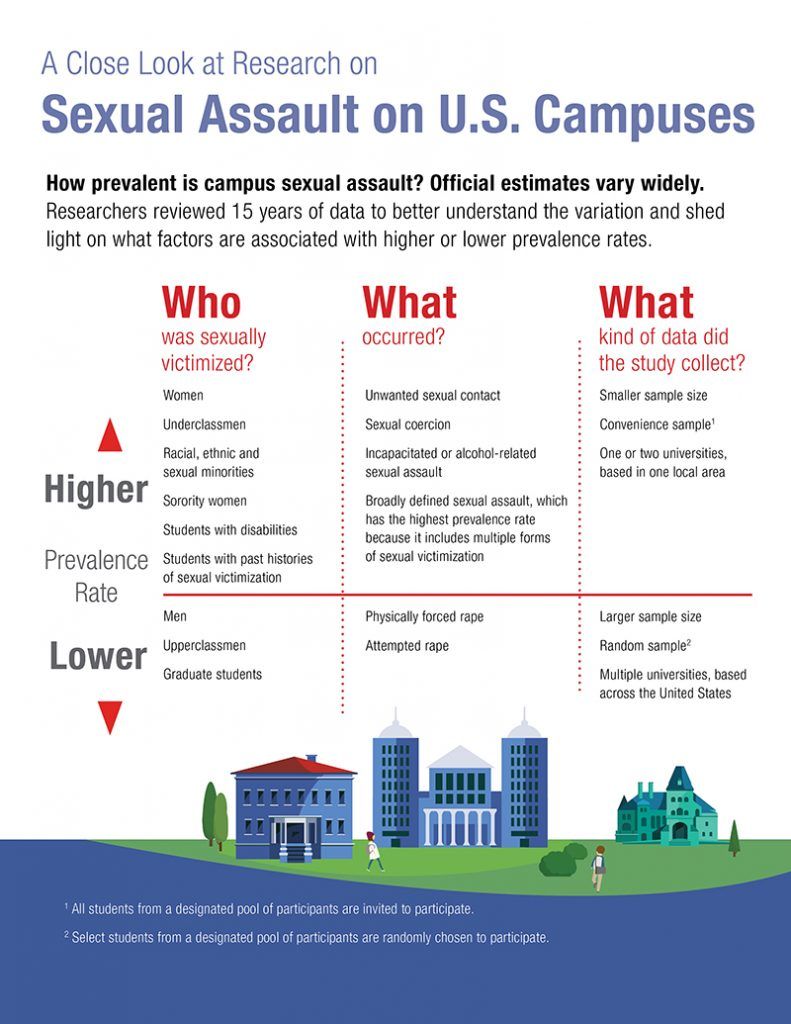